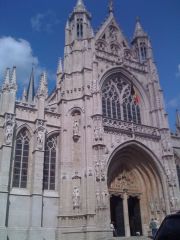 A friend asked me the other day about my opinion as to what is the new ‘capital’ of Europe. Did I believe that London would take the prize? It was in response to a series of New York Times op eds (see here)  The prompt (for those of you who can’t be bothered to click the link is: In every era, one city is designated as a magnet of creativity and energy. Which city is the dynamic center in Europe now?

I had a quick response that on further reading I still believe, but after spending a few days in Brussels I think I’ve changed my opinion somewhat.

This is my original response:

I think London isn’t really the capital of Europe, but I don’t really think that Europe has a capital yet. The split between Brussels and Strasbourg as an administrative capital, and the push to make sure things are equal in language etc makes it hard for just one place to become dominant/ the ‘centre’. There is a lot of work being done right now about ‘global cities’, what they are, how they manifest, what their result will be. Many of the big capitals of Europe are considered ‘global cities’, but I do actually think London will end up being the major hub of this region. Hub, not centre, because I don’t think that culturally it has the same resonance that Paris or Amsterdam once had and I don’t know if thats even possible anymore. I think its part of a network of global cities that include Singapore, Mexico City, Toronto, Rio, Tokyo, New York, Mumbai and a few others. These cities have elements that distinguish them through historical cultural influence, but neo-liberal values have also set a stamp that makes them identifiable. People like myself and my peers move through each city and find ourselves almost as comfortable in one as in another. The difficulty is that the comfort is much more about personal culture and ideology and much less as a communal centre. They are are largely economic hubs, both as centres of regional growth and as financial exchange points, but they also involve travel which means tourism, and the import of globalized goods. There is also usually elements of academia or cultural production, but even here the members are not particularly tied to place as much as subject/ object. This means that inhabitants, while comfortable, are also transient and this makes it difficult to create a more settled cultural and political community that would root one of these cities as a new ‘capital’ in the way meant in the op-eds. I think London is important because of the ties to Europe, the Common Wealth and the US. This is what adds to the mix of cultures and the importance placed on it by so many people. But, I’ve also seen the tensions between long-term residents of the city (like generations of them) and the more recent emigrees. The Labour minister last week got himself in major trouble saying that british employers should hire british workers, even if they might not be as well qualified or hard working and it was a major problem for him. He encapsulates a big tension between brits who believe they are owed something because they come from here and people are taking over what is theirs and immigrants who say that what britain offers is opportunity but if brits aren’t going to work hard enough to take it they will. All of this of course is also predicated on material resources and if the BRIC countries really start to make inroads, especially depending the debt negotiations in the US it could all change drastically.

London also has this unique vibe, there is amazing culture- free museums, concerts in the park, art in the streets, good food and this amazing mix of people (take a bus across Elephant and Castle on a Sunday and you see the most amazing african women on their way to church with these incredible dresses and hats), and I don’t know any city that is as crowded but that has as much green space.

I still believe all these things, but what I’ve come to realize is that London isn’t really in Europe and it’s a mistake to assume it is. Its been a while since I spent any real time here, but very soon after arrival (if you are paying any attention at all) you can’t help but notice the very European-ness of it. I know, for someone who is supposed to be good with words that is a really bad descriptive, but I think its hard to encompass. For one example- in London if you travel by car (or have a very long attention span walking) you can notice that streets and blocks have quite obviously been developed at different time periods, one block will have little bay windows on the ground floor, one street is almost all one particular kind of brick work, but each block has some integrity. Also, they tend to be build in one or two stories until you properly start to get into the city. Here however most blocks are taller. I don’t know if there are more floors, or it seems that maybe the ceilings are taller? On most of the houses I’ve seen there are also these little grillwork balconies on the first (second) floor. The funny thing is that the buildings seem to be sort of filled in. There will be some that resemble each other, but they seem interspersed with buildings of a totally different design culture. Not to say they don’t work, the mish-mash is absolutely lovely, but it definitely isn’t the enlightenment inspired uniform blocks I’ve come to expect. That’s only one part of it though, there are differences in everything else as well. Brussels is definitely French inspired, but the overwhelming impression, and the reason for my change of heart is how little it seems to be impacted by the neo-liberal furore that is ever present in North America, the developing world, cities of Asia and Britain. Although there are some global symbols, there are many more that are local and the feel I get is that Europe is both doing just fine, and much less concerned with the rest of the world. And honestly, if you really think about it, isn’t that pretty justified? Despite the recent economic events and the threats to the Euro, it is still one of the more powerful currencies in the world, and the EU both continues to grow and to absorb economic instability with remarkable aplomb.

I asked some friends about it, and although there was discussion, almost none of it was in reference to the world beyond Europe. And, to be fair, the way the question was posed that makes sense, but I was struck by their ability to take the question that way, that Europe’s capital has only to do with Europe and not with its impact on the wider world.

I realized that I think that probably always been somewhat the case. Britain’s empire was able to expand because of their naval power, and the ability to hem in the rest of Europe, not to mention that the Europeans were a little occupied fighting themselves, but at the same time, despite their actions impacting the rest of the world in the way they have Europe was and continues to be less aware of the world, because the world is aware of Europe. Not sure why that is, but it seems to be historically the trend and likely to continue.