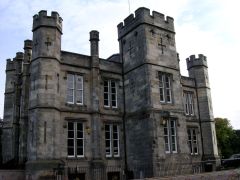 So this is my thought: There is a connection between neo-liberalism and the loss of state sovereignty, right? But what if that loss of power has less to do with the system of capitalism, and more that the state, as a unit of administrative organization, has been outgrown? What if the ability to coercively control territory, and more importantly, that population density has rendered useless those governance mechanisms that held sway during the period of early modernity?

Both neo-liberalism and the state are about governance and monopolies of power, but the shift to ‘smart power’ and the increasing irrelevance of constructed boundaries in flows of information, social connection and ‘goods’ mean that the institutions developed as mechanisms of control don’t hold the same potential that they used to. This is important, especially because of the values we developed based on the ability of the state to mediate between different groups, and balance the rights of the individual against the rights of society.

More important is the ability the state has to attempt to regulate inequality through some accepted legitimate redistribution of resources, not totally socialist or communist, but important nonetheless. The state redistributes wealth from those very well off to those less well off, but also gathers resources to address problems that could not be attempted without some community organization. The problem now is that many of those problems are too big for a state (or several states) to address and the goals themselves are also contested. Because of this, the legitimacy of the state to collect taxes for purely redistributionary policies, or for contested goals is being questioned. Neo-liberalism is blamed for both the failure of the state and the inequality that results, but it may be a case of our economic sphere evolving before our social sphere catches up. This is not to say it won’t. I’m pretty clear that we already are. But I think that to just blame neo-liberalism, and capitalism in general ignores the realities that are facing us, and in blaming the state for failure to combat this new reality is a way to hide our heads in the sand. (I think I’ll come back to this later too)

The real issue is that the power/ responsibility balance is being questioned in myriad ways and the construction of who and for what is exponentially complex. Population density and its associated issues (*I’ll come back to this at some later point) make messy the issue of power to versus power over. This relates directly back to the issue of the state as for several hundred years the state was assumed to have both power to and power over and currently its ability to control either is kind of up in the air.

Another, also interesting, somewhat related point. I was also thinking about the power/ responsibility balance in relation to failure to take responsibility. I realised that although there is often good reasons to say ‘I don’t have any power to take responsibility’, there are also many reasons to say ‘taking responsibility creates its own power’. I think that at times it is true that individuals or groups feel powerless to change their situations, but I also think that there are points when some people make that as an excuse. Those who don’t want to take responsibility blame their lack of power for their failure to act instead of admitting it is a choice they have made. I believe the last great freedom that can be taken is the ability to act, and in acting we should be striving to take responsibility- for ourselves, for our situation, for our community. This is not to say that anyone can and always should act- that would be arrogant and naive, but that I think very often more people could take more responsibility than they do because it is easier to let someone else do it. I find this disappointing, although not terribly surprising. Thoughts on a postcard?