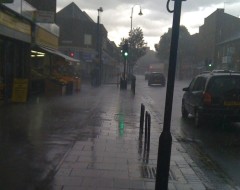 I had one of those affirming moments the other day when I was on the bus. I remembered why I chose sociology, and why I thought it was so interesting. I was sitting there and although I had a book to read, or music/ podcasts/audio books to listen to, for some reason I just wanted to really be in that bus at that moment. There was a really cute little boy, probably about 6 or 7 on his way somewhere with his mother and auntie (or grandmother maybe). He was rambunctious, as kids that age are, but not rude or bratty, just energetic and excited. The interesting thing was the way his affect changed, both unconsciously and completely when other groups including boys got on or off the bus. There was a group of 2 boys, about 12 who got on and off together, neither spoke the entire time they were there and although there was nothing intimidating about them, they had that look that kids get, growing up in a hard place, a sort of set look to the face and a slightly defensive stance. The first boy found these kids fascinating, and I wouldn’t say he stared, but he was totally focussed on them, aware of himself and them and no one else. He had this look, he half wanted them to notice him, to engage him, and he half was afraid they might, not sure if it would in fact be a good thing.

They seemed aware of, but unwilling to engage in the exchange, because they were too cool, or thought it better to stay distanced, or just couldn’t be bothered. They got off and for a short time the little boy went back to interacting with the women he was with.

Then, another group got on, it seemed like a family who had gone for Happy Meals as a Saturday night treat. It was a whole collection of boys all older than the one already on the bus. There was some exchange, because he got really excited and there was some question if he knew the youngest child. But in the same way that they other boys had been too cool for him, the older brothers were also a little too cool, and the younger brother, deciding familial approval was more important also feigned indifference.

The whole thing was so interesting, because it was about the ways we behave socially that we may or may not be aware of. Who we choose to engage with, or tacitly agree to align behaviours. I felt a little like I shouldn’t be watching, but the whole thing is so banal. We all watch on the bus, assigning people to groups, assessing behaviours, judging. The way I do it, and think about it (and write about it) say as much about me as the look on the little boy’s face when he wasn’t sure if it was better to be noticed (in order to maybe be deemed cool) or ignored (in case he wasn’t cool). Thats what sociology is though, for me, the excuse to try to understand who these people were, where they were from, where they were going and the dynamics of the their relations.