I have lots of little things that I think about but that never really seem worthy of an actual post (although I keep being told that my posts are very long so it might be good to make them a little shorter). I decided, as I’d like to update more regularly that I will include more of the little random thoughts I have that are often unrelated but maybe offer something to think about: 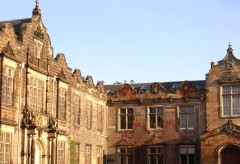 I was wondering about the appeal of male a cappella groups. Why do they seem so ubiquitous at those privileged institutions of higher education and yet largely absent so many other places? I think its about tradition, they have had them since the days the colleges themselves were all male and the fact that it is institutionalized now adds value to what is otherwise pleasant, but slightly out of step with current social mores. So why value tradition? I think its because it’s a demonstration that you have been allowed to carry on your particular social customs for long enough for it to become tradition. As evidenced by Scotland and Ireland, at the point they were subjugated all their traditions and cultures were stamped out as much as possible by their invaders. The same is true for so many other conquered peoples for so long. Tradition is the indication that you have not been conquered and therefore been allowed to continue with whatever particular practice you may have had. Tradition is a mark of ongoing power and privilege. Crazy, huh?